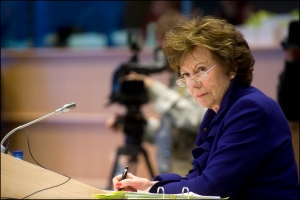 – EU prepares plans for a common European telecom market by 2015 –
In a speech on Thursday, EU Commissioner Neelie Kroes called for a thorough reform of telecom regulations and the creation of a pan-European telecom market. The new reform proposals are expected to be agreed in April 2014 and should make it easier for operators to create European cross-border networks.

The EU already reduced the prices for using mobile phones and tablets abroad over the last years, thanks to the pressure of “Europeans for Fair Roaming”, parliamentarians and other groups. Commissioner Kroes now wants to strike one last time before the upcoming European elections next year and completely re-organise the European telecom market. But the reforms must truly benefit the consumers, warns the consumers’ group “Europeans for Fair Roaming”.

The regulation package is expected to make cross-border mergers and network sharing easier and Europeanise telecom regulation. But the consumer group “Europeans for Fair Roaming” which also accomplished the latest cuts to roaming charges in the EU last year warned that the new rules must keep consumers in mind.

The coordinator of the FairRoaming.org campaign, Bengt Beier, said: “The newest plans of the EU might help to make the telecom market more European. However, the EU must ensure that this benefits consumers and not just the telecom providers. The prices for roaming and for all cross-borders phone calls must go down significantly. We call on the European Commission to make concrete proposals for achieving lower prices for all cross-border phone calls. The best way would be to introduce price caps for all international phone calls within the EU in a similar way like this is already done for roaming.”