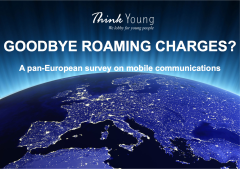 The ThinkTank “ThinkYoung” is conducting a survey to determine how young Europeans aged 18-35 view the planned elimination of roaming charges and issues of net neutrality in the framework of the European Commission’s proposal for creating a European single market for electronic communications.

Comments Off on Survey on roaming: take part!